I was excited to be a part of the “Dream” theme, and then I found out I’m leading off the “Nightmare?” section of it. /Al Gore/ 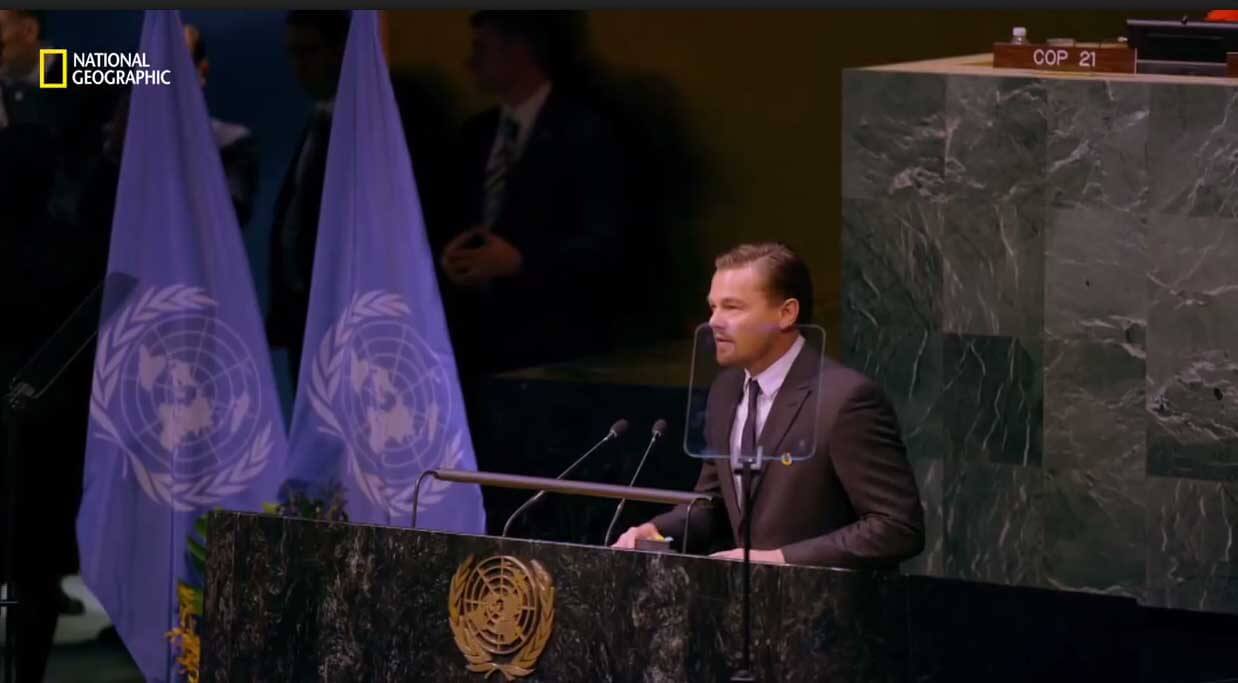 … After 21 years of debate and conferences it is time to declare: no more talk, no more excuses, no more 10-year studies, no more allowing the fossel fuel companies to manipulate and dictate the science and policies that affect our future.
This is the body that can do what is needed. All of you sitting in this very hall. The world is now watching. You’ll either be lotted by future generations or vilified by them. Lincoln’s words still resonate to all of us here today, „We will be remembered in spite of ourselves. The fiery trial through which we pass will light us down in honour or dishounour to the last generation. We shall nobely save or meanly lose the last best hope of Earth.”
That is our charge now. You are the last best hope of Earth. We ask you to protect it. Or we and all living things we cherish are history.
(Leonardo DiCaprio’s speech (extract) as the final speaker at the Signature Ceremony for the Paris Climate Change Agreement, UN)

This film is based on summation of stunning and thought-provoking facts.
Contact us and learn why many people are thinking differently about the future. After watching the film you will get a picture of the world which helps you make your future decisions in another way.

3200 km from any coast and civilization.

Due to the growing shortage in forest and fish supplies, intensified sweet water consumption and the lack of regulations to prevent climate change, the current course of mankind is now deemed unsustainable – warn the United Nations. According to another relevant study published in the field, the rise of the Western world has run parallel to the decline in the biological variety of poor countries exporting raw materials.

Although favourable changes have been achieved through specific agreements – the report stipulates – negotiations held prior to the summit mostly focused on problem areas. States were unable to agree on basic issues such as a more strictly controlled attitude to salt water fishing or a constraint on companies to measure their ecological footprints. Surely, there is a need of an urgent and decisive change to a green economy with low carbon intensity, which is capable of using resources effectively and creating new workplaces – BBC quotes the leader of UNEP, Achim Steiner. Insofar as the current trend continues without change, governments will have to face unprecedented devastations and environmental declines – Steiner sums up. All this, by and by, is also an economic interest since, according to UNEP, air pollution and climate changes place extra burden on global economy.

The overall picture then is more than just grim. Despite the international agreement to tackle environmental decline and poverty, the outlook is far from being optimistic. The report states, among others, that air pollution can cause an annual six million premature deaths worldwide, and that the current trend in the emission of gases causing glasshouse effect could result in a 3 degrees Celsius increase of the general temperature on Earth.

In their global assessment published every five years, GEO rates improvements in ninety crucial environmental areas. According to their report, progress is detectable only in four areas: to use unleaded petroleum, to stop the destruction of the ozone layer, to improve access to clean water, and to research the pollution of the seas. Further forty areas also show some improvements, such as the slowing down of deforestation and the establishment of protected natural habitats. Yet little or no progress is visible in twenty-four crucial points; the fight against climate change is one of them. The situation has apparently got worse in eight areas, for example concerning the status of coral reefs. Due to insufficient data available, no clear conclusion could be drawn in the rest of the appointed areas.

Increasing Prosperity versus a Declining Nature

Also recently, Nature magazine published a study with a similar topic according to which the biosphere is experiencing rapid and most probably irreversible changes. A team of primarily Australian scientists calculated that more than 40 per cent of the Earth’s continental areas today are used to supply for human needs, and since our population will expand with an anticipated two billion inhabitants this rate could exceed 50 per cent. Based on the ever-growing need for power source intensive food supplies such as beef, this prognosis could happen by sometime around 2025. And if we want to avoid the worst to come, we should remain below the 50 per cent limit – said leading researcher Anthony Barnofsky (from Berkeley).
According to the study, it is global commerce satisfying the demands of wealthy countries that can be primarily held responsible for the reasons animal species are threatened. This trend could be stopped with a better management of supply chains or, for instance, with the labelling of products. Occasionally other methods can also have favourable results, like the 1970s campaign to protect dolphins, which managed to persuade Western consumers to boycott tuna fishermen ignoring such concerns. Experts say that governments should introduce commercial sanctions in favour of the cause and that they should regulate more strictly all commercial activities threatening biodiversity. There are of course favourable undertakings, such as the decision introduced by Nestlé through which the giant food industry company binds its palm oil suppliers to protect rain forests.

Investigating the relations between endangered species and the global trade in goods, the study arrived at the conclusion that one of the main factors responsible for the destruction of biodiversity is the trade in goods from poorer, mostly known as developing countries to wealthy nations. Previous studies had already clarified that the demand for products like Brazilian beef, Indonesian palm oil, Mexican coffee or Vietnamese fish had been damaging effect to the environment. The study published in the columns of Nature, however, is the first to try and demonstrate the global effects of commerce on biological diversity. The study also investigates the effects of Malayan gums export, fishery in the Philippines and Thailand, Columbian banana and tobacco production, and the mining industry in Ghana.
According to the study, the rise of the United States, Japan and Western Europe has run parallel to the decline in the biological diversity of poor countries exporting raw materials. Environmentally destructive import activities are pursued by the USA, Japan, Germany, France and Great-Britain, while wildlife suffered the most destruction in Indonesia, Madagascar, Papua New Guinea, the Philippines and Sri Lanka.